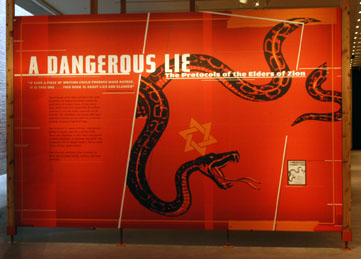 « Prejudice against or hatred of Jews—known as antisemitism—has plagued the world for more than 2,000 years. The Holocaust, the state-sponsored persecution and murder of European Jews by Nazi Germany and its collaborators between 1933 and 1945, is history’s most extreme example of antisemitism. Yet even in the aftermath of the Holocaust, antisemitism remains a continuing threat.

This exhibition examines the history and continued influence of one of the most pernicious and widely distributed antisemitic publications of modern times, The Protocols of the Elders of Zion. First published in Russia in 1905, the book is composed of 24 chapters—protocols—that describe the alleged “secret plans” of Jews to rule the world by manipulating the economy, controlling the media, and fostering religious conflict. Neither the conspiracy nor its leaders, the so-called Elders of Zion, ever existed. »